You are here: Home / Jeff's Experiences of a Lifetime / Casablanca Day One

Upon exiting the flight from Lisbon I was immediately aware that I was in the Sahara, the warm air enveloped me & I loved it (especially after being in the Rainy /Cold UK for the last three weeks). After easily clearing passport control and catching the car service to the hotel – it was time to explore the Casablanca. Unfortunately it was already getting dark, but that also made the city more alive. Wandering up the Avenue Hassan II past Mohammad V Square with a plethora of vendors selling everything from snacks to calling cards, down to the Old Medina where the streets were packed with people. Here music filled the air from different performers on every corner. There were also plenty of buskers entertaining the masses. And the food – ah the food. Carts full of a myriad of products: Snails to be eaten by the bowl with a toothpick, cactus pods filled with a sweet seed filled red fruit, women clicking their serving tongs at you as you passed hoping to catch your ear and eyes to buy their samosas or candies, roasted chickpeas and nuts or fresh made potato chips. After enjoying some music and the cactus I arbitrarily picked a restaurant and pulled up a chair, ordered the “mix” plate and Fanta. Having really no idea what it came with or how much it was – I was pleasantly surprised with first a small bowl of olives arriving along with some fresh baked bread. Then a huge platter of grilled meat, vegetables and carbs was presented. Two skewers each of – beef, chicken, lamb & sausage – two small hamburger patties on top of a fried egg, a nice roll of chorizo, fried rice, beets, potatoes & carrot. Finally a plate of French fries. Adding the hot sauce from the squeeze bottles, pulled the meat off the skewers and had a feast. So So Good & then to top it off, after requesting it, the bill came……. 76DRM which is $8.07 (for two people)!!!! I could get to like this.

Strolling back in a different direction, I was hoping to find someplace to get a drink. But being a Muslin country I was not sure how that worked or if it was possible.   All of the cafes that lined the street were filled with men drinking tea or coffee. I didn’t see any food or other drinks – well other then the occasional Coke or juice. Then I saw a doorway that looked different with stringed beads in front and could just make out what looked like a bar with lighted shelves filled with liquor bottles. As I approached a man sitting outside spread apart the bead curtain and said “you are welcome”.

Inside it was 99% men drinking & talking but I could see friendly faces smiling thru the cloud of cigarette smoke & at the bar I ordered “what he’s having” which was a local beer “Spéciale Flag” (pilsner). Then found an open table and watched the football game on the TV, of course. Next thing I know a bowl of olives and another one of lentil soup arrives. It was excellent. Then as I was just finishing my beer – another arrives. The guy at the bar bought me one – I thanked him “Choukran”, he asked in French where I was from – America I told him. “I love America, the Best country in the World, along with Germany – Mercedes Benz. You are Welcome my Friend”. We toasted Chin Chin and drank to our new meeting. To be honest the smoke was getting to us so after that beer – I bid thank you again and paid my bill 25DRM or $2.65 which included the snacks. As I left the crowd cheered – I know it wasn’t for me, someone just scored a goal on the TV, but it was a fun ending.

Heading back to the room – I thought it might be cool to end the night at a traditional Hookah bar – I noticed one just three shops down from my hotel. Unfortunately the doors were closed so I figured they closed at 22:00 (the next night I discovered it was not closed they only keep the door closed for “religious” reasons but that Experiences is for another story, but trust me it too was awesome). But now with a couple of beers in me & a full stomach – I wasn’t ready to call it a night so wandering up the street the other direction and noticed another string beaded door – this one looked like a sports bar (which in hindsight I think they mostly all are). Again the doorman welcomed us in and finding a seat discovered this one had a musician performing on the ancient Oud. It was amazing – the vocals and the instrument were mesmerizing. Again I ordered a beer, this time a Heineken came to the table along with another bowl of lentil soup, plus a cucumber, and tomato mix and a plate with pan fried sardines and sautéed peppers. Again – so good. I noticed a well dressed man at the bar singing along with the musician and showed my appreciated with a smile. Next thing I know he’s introducing himself and trying to speak French to me. To no avail, we had a hard time but smiled and shook hands, and again I heard – “you are welcome”. Back to the music and food and all of a sudden another beer shows up. The gentleman came back over this time with a friend who spoke English and interpreted for us. He told me that the man was a journalist and had traveled the world; loved America and was there for the Atlanta Olympics, the National Convention in LA and a couple of other times that I didn’t catch. We bantered back and forth and had a jolly time. A bit later when I was about to leave another beer showed up, another plate of fish and a pasta dish. This time the Owner of the bar came over along with the interpreter and welcomed me and informed me that this one was “on the house” and he was honored we were there. Now this was getting really great. So now eating my fill (this was after that huge dinner mind you) of more fish and beer and the amazing music. The whole place with buzzing with conversations and some folks were dancing and singing with the music. Again I was about to leave and another beer showed up. This time from a random patron sitting across from me. I made my way over thanked him with honor, hugs and a kiss on each cheek. The man looked to be in his 70’s and while we had no common language we laughed, smiled and thanked each other.

Finally at 2:30am, after thanking everyone again at the bar including the owner – they tasked one of the servants to walk us to the hotel, which was actually just around the corner but I still appreciated the concern and assistance. I took a shower because I reeked of smoke – but climbed into bed with one Hell of a great Experience to put into the records. What a great way to start my Moroccan Experience. 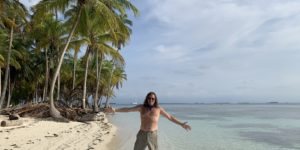 On April 5, 2019 I Officially Have Been Traveling for 1 Year Abroad.  I have had the fortunate opportunity to travel in 25 countries & visited 103 cities. Have collected more experiences that I thought possible and this is only the beginning. I’ve met and or Traveled with 16 friends and family and Lost count […]

I'm 55 years old - I'm leaving on 5/5 - to Travel the World for 5 years - on an average of $55 per day I have worked hard at a 35 year career in the Entertainment Industry which I have loved and have a passion for but I also play hard (just ask anyone that knows me).  I enjoy the finer things in … END_OF_DOCUMENT_TOKEN_TO_BE_REPLACED